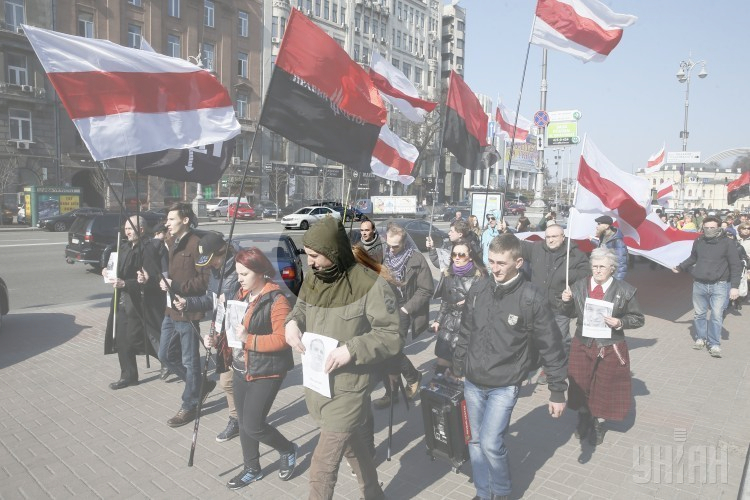 On Saturday, May 23, an activist of Autonomous Workers’ Union was attacked in the downtown Kyiv. The motives for the attack were political. The attackers had set up a meeting with the artist Dmitry M., posing as customers for his services. When Dmitry arrived, the two guys menacingly suggested to “go and talk somewhere else” and attacked him outright after his refusal. The fight was over in no time, as some passers-by intervened — the attackers withdrew, shouting their excuses: “He was the first to snitch on us on the Internet!”

The activist wasn’t injured; however, this act cannot be ignored. This set-up meeting was arranged neither by the police agents nor by boneheads, but by our Belarusian “comrades” – former political prisoner Alyaksandr Franzkevich and his friend Maxim aka “The Belarusian”. Several weeks before the incident they had written a homophobic, sexist text about the Kyiv May Day rally participants: they were unhappy with the presence of LGBTQ and anarcha-feminist slogans, behind which, according to the authors, “topics of class and social inequality were lost.” Dmitry indignantly commented on this text which was being pushed through by “manarchists”. After that they decided to “punish” him physically.

This is not the first time Alyaksandr Franzkevich engages in a questionable activity: he threatened activists, gave his endorsement to those who employ homophobic and anti-feminist rhetoric (which has recently came into fashion in some quasi-anarchist circles), and advocated cooperation with nationalists. Maxim was recently seen at a nationalist rally organized by the notorious Right Sector – such “allies” are more acceptable to them than feminists and LGBTQ. Still, up until now most of the other leftists tolerated their presence in the movement.

On May 23d, the line was crossed with the attack. This should be a sufficient argument to finally stand against all attempts at establishing hierarchies, hate speech, and police-like methods. These practices, normally employed by the far-right, have no place in the anarchist community.

Autonomous Workers’ Union urges all who consider themselves part of the anarchist movement to renounce any form of cooperation and communication with the aforementioned persons.

7 Comments on “Attack on the Autonomous workers’ union activist”